Democrats Lining Up to Take on Virginia State Sen. Dick Black Next Year

Who is far-right, extremist State Sen. Dick Black (R; pictured with just-as-extreme-bigoted-and-crazy Eugene Delgaudio)? For a short sampling of Dick Black’s lunacy, see: Video: Far-Right Virginia Republican Rants About Long-Acting Contraceptives “Rendering” Women Infertile, Targeting “the Wrong KIND of Children”, Video: Virginia State Sen. Dick Black, Friend of Bashar Assad’s, Goes on Long, Rambling Tirade About “False Flags,” Nuclear Armageddon, etc., What Is It With Loudoun Republicans?!? Dick Black on Spousal Rape, “Nighties,” etc., The Truth About Dick Black (e.g., called birth control pills “baby pesticides,” passed out “pink plastic fetus dolls to state lawmakers in 2003 in a creepy campaign to win votes for various anti-abortion measures,” called “An Embarrassment to us all” by John Feegel, a former Chief of Staff to the Republican Leader in the Virginia House of Delegates); Republican Loudoun-sanity Continues: Dick Black Rails Against Gays in the Military (“there was a young fellow who went to the showers at night, there were two homosexuals lurking — they were also basic trainees – and they strangled him with a towel and forced him to submit to, you know, things that we won’t talk about”); Sen. Dick Black (R-Homophobia): Polygamy “just more natural” than homosexuality; VA Sen. Dick Black (R) Praises “Extraordinary Gallantry” of Syrian Armed Forces, GOP Candidate Who Made Marital Rape Remarks Drops Out of Congressional Race, etc, etc.

So who might Democrats have to run against Black and defeat him in November 2019? I’m not sure how many candidates we’ll end up having, but I’m already hearing about a bunch, including one (Lucero Wiley) who just announced yesterday. 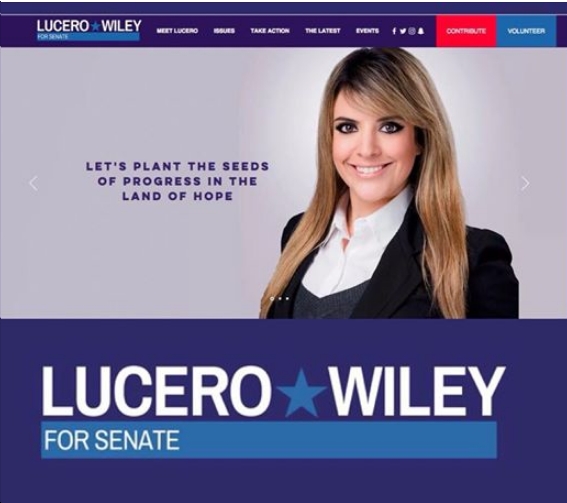 First, here’s an abridged version of the announcement by Lucero Wiley.

Today I would like to announce that, tired of living in a world full of discrimination and injustice, I can no longer sit down and do nothing. I cannot watch children being held in cages, I cannot turn a blind eye on discrimination and abuse, and I will not stay quiet while I see my people, OUR people, be object of denigration in this country… So I have chosen to stand up. To no longer resist, to no longer condone. Enough is enough. It is time for us to take our power back and to fight for what is right. To speak up and let our voices be heard.

Today I answer the call to run for office: I am running in the primary to challenge Senator Dick Black in the 2019 general election for one of the top targeted seats in the Virginia Senate. Because today is the day I say ENOUGH…For everyone who believes that families belong together. For every immigrant that got banned. For everyone who’s got PRIDE and believes that #lovewins. For every DREAMer. For everyone that said #metoo. I am asking you to stand up…It will not be easy but I can promise you, it will be worth it. It is time to fight for what is right. It is time we take a stand and help the American Dream become the American reality…and plant the seeds of progress in the land of hope.

I checked Lucero Wiley’s website, and she’s certainly got an impressive bio:

Run For Something Endorsement